It was an awesome turn-out to the CMC Empress trip organised by Ben Mangan. Five days of fine weather saw Empress almost full with 8 people in the hut at one time. Thanks to good snow coverage on the Hooker, access was relatively quick via true-right of the icefall, 9 hours from Wyn Irwin to Empress. 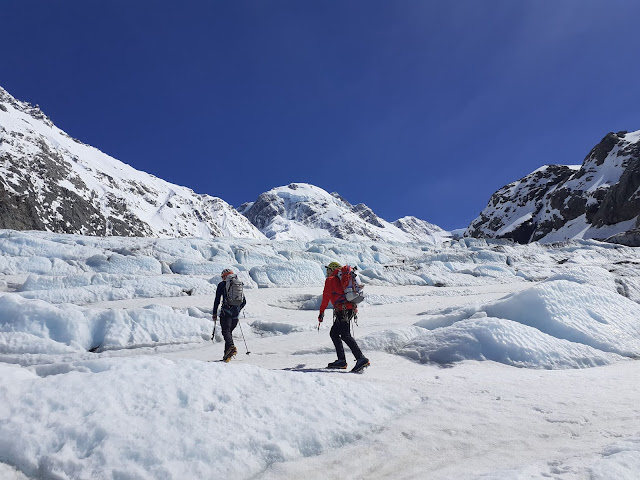 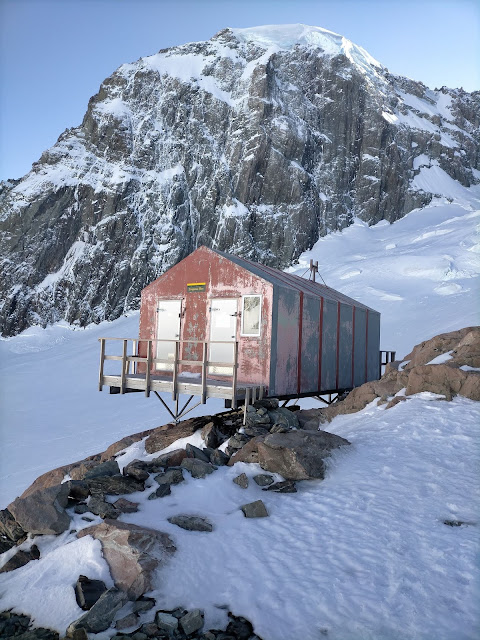 As it was October, mid-spring, we had planned to climb one of the ice routes on the Sheila. Upon reaching Empress, we could see the rock was warm and dry, and the ice nowhere to be seen. 4am the following morning we set off for the Central Buttress. 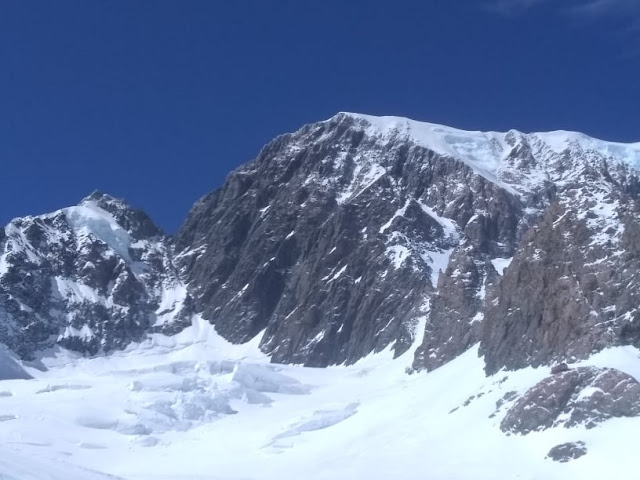 A sudden whoompf in the snow-pack put us on edge as we approached Fyfe gut, we pitched the glacier edge to the start of the rock to stay safe. The climbing was moderately gripping at first, some mixed conditions forced us to climb the slabby rock in crampons. ‘Grade 12’, but with a serious feeling. 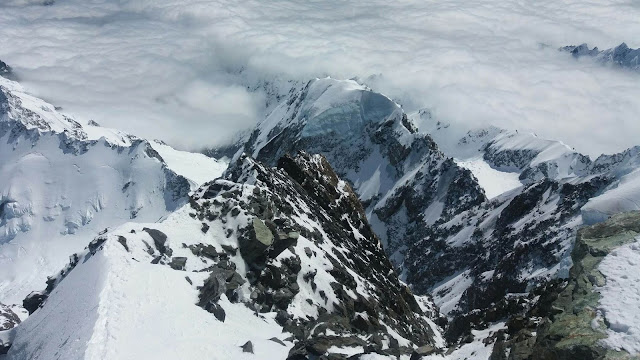 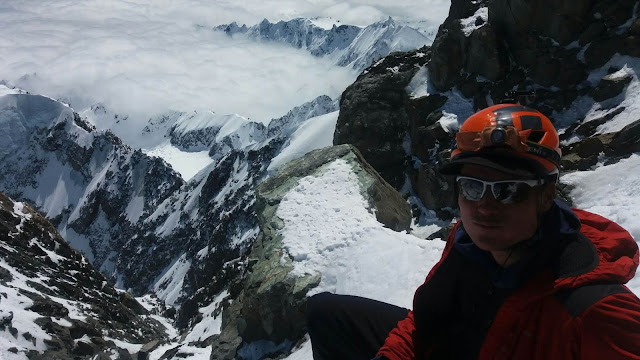 After a few pitches we started to romp, carefully negotiating the verglassed rock now without ‘pons, simul-climbing and stretching the rope. At 2/3 height we took the offer of ice gullies to the south of the Central prow, enjoying consistent & sustained moderate terrain all the way to the summit ridge, topping out 30m from the high peak at 4pm. 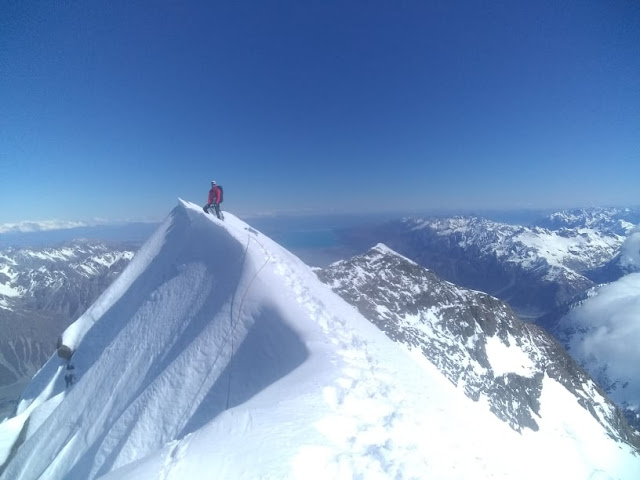 The Linda was so well filled in we didn’t even need a rope, and we wandered into Plateau Hut at 830pm greeted by Gavin Lang, Sooji Clarkson and a host of others.

I have long stared at the glistening east face of Tasman from Plateau hut and admired the classical snow ridges Syme and Silberhorn protruding down from the pointed summit. After the fantastic climb up and over Aoraki from Empress, we enjoyed a rest day in Plateau. But there was still 2 days of good weather remaining. Why don’t we attempt an ascent of Tasman? As the day of feeding progressed, our calves felt replenished, and at 4AM the next morning we were rearing to go with light packs bound for Tasman.

We negotiated daunting crevasses through the mad-mile and found a good schrund crossing on the rightside of Syme to reach the main snow arete in time for the morning alpenglow. This was the definition of aesthetic. 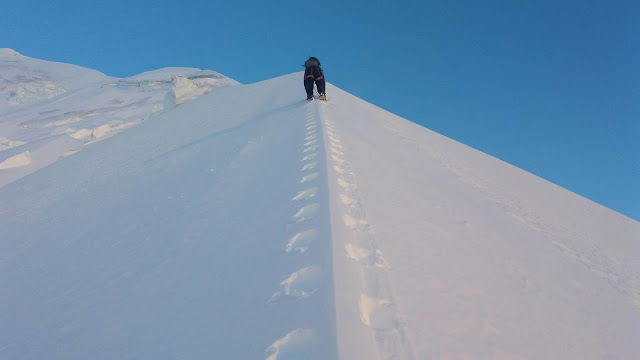 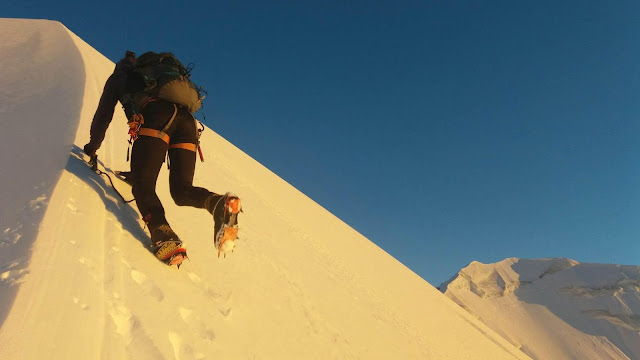 At the North Shoulder junction, we deemed it safer to climb straight up a nose of bulging ice rather than traverse avalanche-prone slopes across the east face. From here onwards we had astounding views over the West Coast Neves. The ridge narrowed to a razor-sharp edge, we elected to rope up. 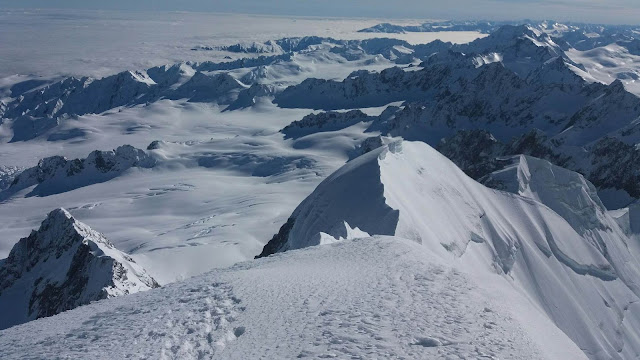 Andy straddled the sastrugi ridge with his legs and the rope flaked between the east & west coast, and we ran a 200m pitch to the glorious summit. 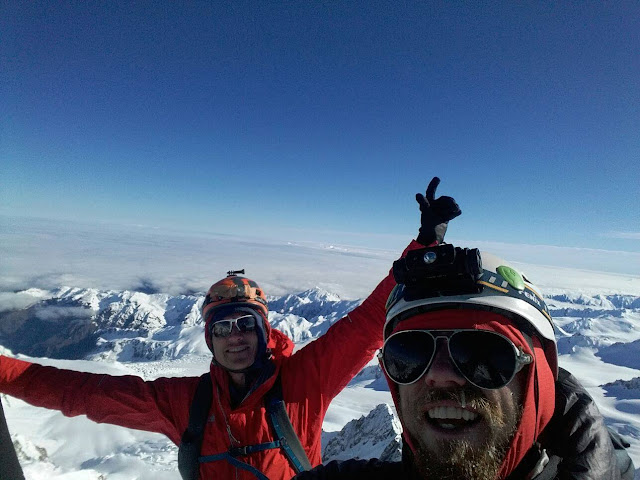 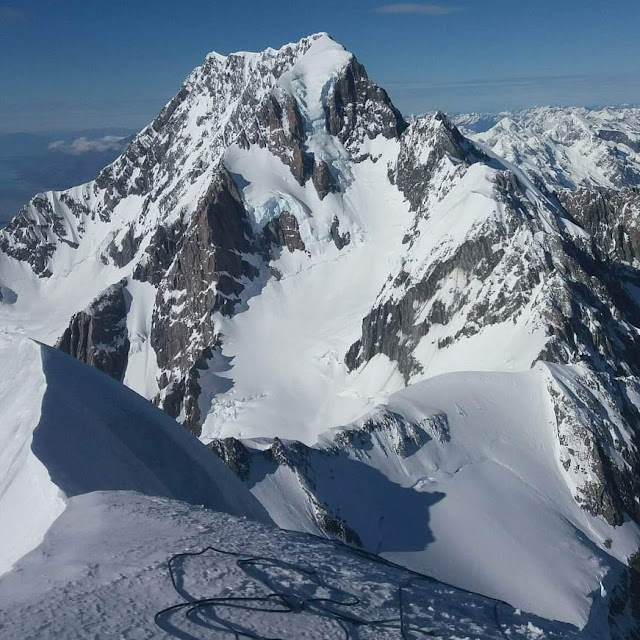 The descent was harder than the ascent, hard swinging into blue ice on the Silberhorn Arete. I was grateful for sharp points. I had never simul-down-climbed before, but it felt like an efficient method for this section all the way to Silberhorn, with one abseil down an ice cliff. The Silberhorn rock-step was nasty, 3x 30m abseils led us through horrendous loose rock with just enough ice for v-threads. 12 hours return to Plateau.

We walked out the following day via Cinerama/Boys Glaciers, and instead of taking garbage gully to Ball Hut, we walked all the way to the Tasman terminal lake, then up through the gut of Husky Flat slip. 7.5 hours to Ball carpark. It’s a toss-up which way is faster between this, the scree slope above Husky Flat. The fixed ropes around Husky Flat might still be an option. At least the good news is walking in & out of Plateau should still be feasible for the next while, one way or another, for those in seeking a complete mountaineering adventure. 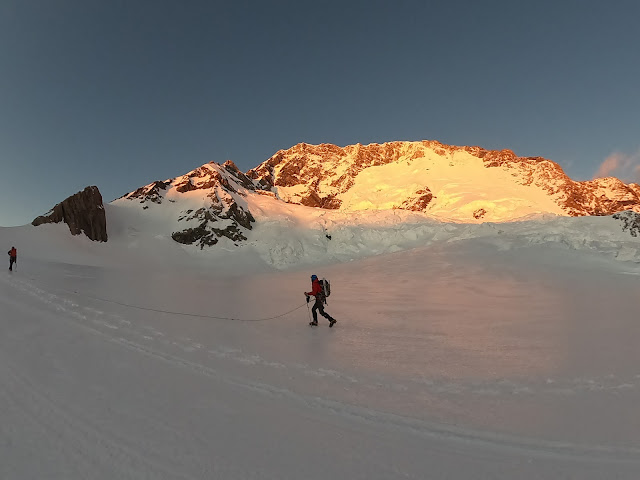 Posted by Alastair McDowell at 01:17

Welcome to my Mountain Adventure Blog

I hope you enjoy reading about my latest adventures in the mountains. I hope you will be inspired to venture into the outdoors to experience adventure for yourself. Kia Kaha!
-Alastair
"The danger of an adventure is worth a thousand days of ease and comfort." - Paul Coelho
Cover image: Summit of Aoraki-Mt Cook, December 2014, by Elisha Nuttall.

Alastair McDowell
New Zealand
I am a passionate mountaineer and outdoor adventurer from New Zealand.