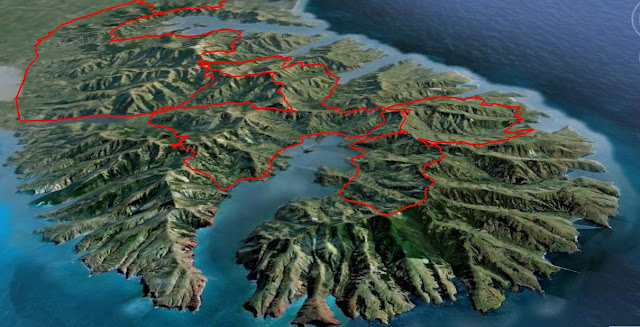 It was late Friday night when I realised I might have bitten off more than my tyres could chew. All four Topo50 maps were spread across the floor as I studied the course. Just tracing out the massive route was an act of endurance in itself and by 9pm I still hadn't eaten. I felt sick with hunger, but as the unyielding plate of pasta beans & chia seeds arrived, I could hardly resist the urge to vomit.

Yes, alone in the centre of Christchurch, I felt in no fit state to ride 300km across the Banks Peninsula the following morning. The route was infused with 8,000 metres of climbing - rich nightmare material. Exhausted just contemplating the mission, I fell asleep before preparations were done...

Roll on 7:30am, and the nerves were gone. Thirty-five other nutbars lined up at Hansen Park, including the zinc-lipped Sam Manson strolling my way. "So. Ready for 300K mate? Your chain lubed?" Uhh, its a dry lube... After a hasteful dash back to the car my heart rate was well over 200 before we'd even started. It took a while to relax as straight in we jostled for positions across the park, and then into the first climb up the classic Rapaki Track.
Le Petit Brevet waits for no man! 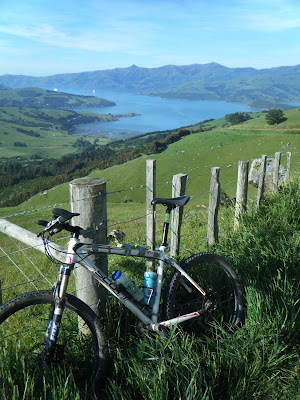 Cruising along the Port Hills ridgetop road, I soon found pace with a fellow solo rider. "The name's Dave by the way". I was so grateful to find a partner to share the oncoming trials of pain, joy and suffering. Dave had ridden 225km of the course during the week and knew the course to the dot - across the rugged grassy tops of the western peninsula we traversed The Monument, Mount Fitzgerald & Sinclair. It was awesome to tap into his local knowledge. Horror stories were told of riders unwittingly following 'nice' trails off the wrong ridge into dense gorse & thicket...

This infamous section known as the Double Fenceline Traverse included over twenty tedious fence jumps and crossed the harshest terrain of the course. Three hours of hardship, and the worst of the navigation was over. Six hours in and 75km to boot, we rewarded ourselves with hot pies and a milkshake at the quaint town of Little River. 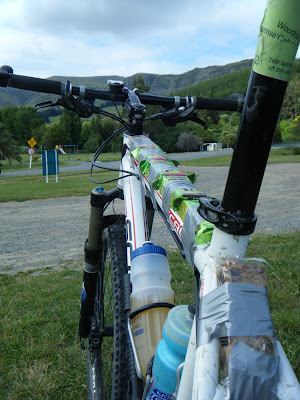 To save weight off my bag, and lacking any sort of pannier bags, I strapped all my OneSquareMeal and BumperBars to the top tupe - needless to say I was hungry at every downward glance. But food at your fingertips was crucial for a race of this length, you needed to stay on top of nutrition at all times or risk burning out with miles to go. 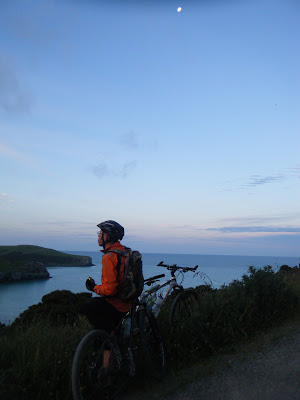 By the time dusk approached, we had crossed the peninsula three times, and were heading up our fifth and most brutal climb. The sign heralded a taste of what was to come. Big Hill Rd could have been more appropriately named Big Long Steep Unrelenting Hill of Death Rd and any tired cyclist would have grimly agreed.

As the brilliant sunset began to fade out of a huge sky, so did my consciousness... After almost fourteen hours on the saddle, now without light and engulfed in clouds, I was over it. The climb wasn't steep - just painfully enduring and neverending. A shot of No-doz and Redbull perked me up and we dug deep to the finally reach the Summit road. 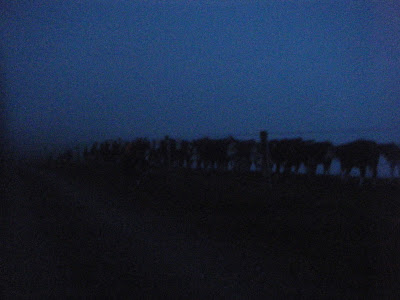 Swarms of cows emerged from thick cloud as we stopped for an innocent suckle on the Camelbak. The atmosphere was still and eerie, but my mind was rushing and frantic due to the combination of  intense fatigue and the massive caffiene hit suddenly kicking in.

This whole time the only thing on our minds was getting over the hill to Akaroa before the shops closed for dinner. We were both furiously hungry and in desperate need of a hot, hearty feed. Praying that the faster riders were keeping the bars open for us, we blasted the descent into town. We could hardly care as we burnt through the 700 metres of altitude that had to taken two hours to accumulate, all in a matter of minutes. 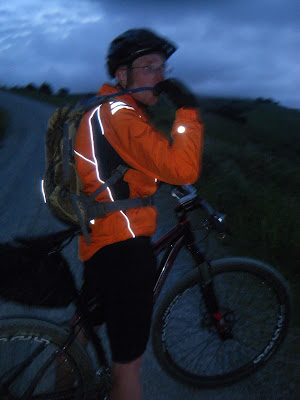 A sea of flickering lights of appeared across the harbour: Akaroa. Alive and well. I stumbled into the first pub, the Tui Tavern, and immediately ordered a large meatlovers pizza without checking the price. The lot was washed down with lashings of sweet milky tea. Just minutes before I was struggling to stand upright, slogging my bike up the state highway at midnight. This change of events was almost too good to true!

This journey was one of simple pleasures. Every sweet moment was savoured, and every ounce of suffering relished.


At the pub we met a few typical blokes, on their sixth lager and betting madly on the horses. They happily helped themselves to my food as I dozed off for a moment. We had a great time.

Come 12:30am my trusty mate Dave Cooper, who had stayed with me all day despite my lagging, was ready to go. For him it was all or nothing. Sleeping wasn't an option. His bottles were full with fresh silver RedBull, and he was looking good. "It'll be eight hours home." For a moment I was tempted... Christchurch by 9am sounded fantastic. "I won't be slowing down though. There's 120km and 4 serious hills to go." I withered at the prospect, and saluted his endurance as he rode off into the dark. What a man.

Meanwhile, I found myself a comfortable possie in the kid's playground under a platform. Finally a chance to use my MacPac retractable foam sleeping matt. I was out to it, curled in my light sleeping bag that I'd lugged around the hills all day. I woke at 5:30am to a foggy dawn. Eager to erase all evidence of my freedom camping before the kids arrived I quickly packed up and scampered off to the bakery for a cooked breakfast. Choice.

Sunday turned out to be a stunner, and would have been great waste of scenery to have struggled through in the dark. Payment for the sunny aesthetics was a scorching heat and a forever parched throat that even the richest Vitasport couldn't quench. On the grovellous gravel road climb from Pigeon Bay to Port Levy, I managed to slurp my water reservoir dry. Minutes later I was dying of thirst, and dashing between the sparse shady sections of road...

A flash blue Honda halted to a stop behind me, also struggling to maintain traction on the steep slope. I put on the most dehydrated weary face I could muster, not a hard task, and their sympathy yielded a golden can of Fanta. It was even cold. I thanked the friendly Dutch couple, and slumped into the shaded ditch to enjoy the sweet orange drink. A journey of simple pleasures...

A rugged gravel descent dropped us into Little River for the second time, only 70km of mostly flat fast terrain would lead us to Christchurch. It wasn't smooth sailing by a longshot. By now the saddle sores from over twenty hours on the seat were becoming excrutiatingly painful, and dominating our thoughts. Peeling off the saddle was as bad as getting a wax with barbed wire. As the River Trail lengthened out into miles of straight shale trail all I could do was scream! The mental challenge was now. Who would have guessed that the crux of the Brevet would be flat easy trail, in a peninsula saturated full of endless brutal climbs! No, to keep moving on this track took every ounce of motivation, and minutes turned into hours...

On the distant horizon the fabled Port Hills grew larger until the final ascent up Kennedy's Bush track finally materialised. But from here was all familiar ground from the R&R Mid-Week Rogaine, and I savoured this grand and glorious finale. Gazing out over Christchurch and the sprawling Southern Alps was an emotional sight to end this huge mission.

I finished alone at Hansen Park, early Sunday evening. Kids were playing cricket and rugby on the field as I rolled past, stopping the clock on 34 hours 45 minutes, still standing.

Posted by Alastair McDowell at 02:33

Welcome to my Mountain Adventure Blog

I hope you enjoy reading about my latest adventures in the mountains. I hope you will be inspired to venture into the outdoors to experience adventure for yourself. Kia Kaha!
-Alastair
"The danger of an adventure is worth a thousand days of ease and comfort." - Paul Coelho
Cover image: Summit of Aoraki-Mt Cook, December 2014, by Elisha Nuttall.

Alastair McDowell
New Zealand
I am a passionate mountaineer and outdoor adventurer from New Zealand.